PSIQUE - SCIENTIFIC JOURNAL OF PSYCHOLOGY OF THE PSYCHOLOGY RESEARCH CENTER

Psique is an annual journal that annually publishes, since 2005, original articles and communications in the scientific area of ​​Psychology, in its various fields of specialization. Psique is particularly aimed at researchers, professors and students in Psychology but also at readers in general who are interested in the knowledge of this science. The magazine publishes articles in Portuguese, Spanish, French and English. 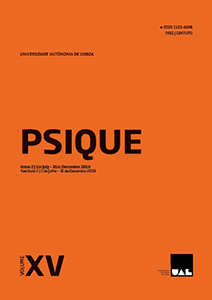 PDF version
Quality of life and the use of alcohol, tobacco and other drugs among university students

PDF version
The high sensitivity of sensory processing and aggression: contribution to the study of a relationship

PSIQUE has established protocols with:

Português
This site uses cookies to enable a better user experience. By browsing the site you will consent to its use.OkPrivacy Policy